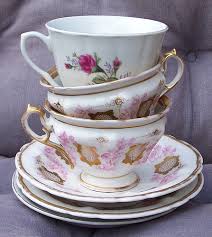 Have a cup of tea.

Tea-drinkers have always known that almost anything is possible with a cup of tea in your hand, and now it seems that the scientists are catching up with them.  For there seems to be proof that a simple cup of tea can spark an instant burst of your brainpower and creativity, enhancing your mood and cognitive ability.

Yet, although tea contains both caffine and theanine, both of which increase attentiveness and alertness, these do not usually take effect as quickly as the simple act of drinking tea seems to do.  Thus, researchers suspect that simply drinking the tea works to enhance your mood.

Test found that drinking tea helped people in both divergent thinking (the process of coming up with a number of new ideas around a central theme) and also with creativity.  This must make tea the go-to drink for writers, artists and musicians, and indeed anyone looking for inspiration!  So – go put the kettle on!

This study article appeared in the journal Food Quality and Preference.